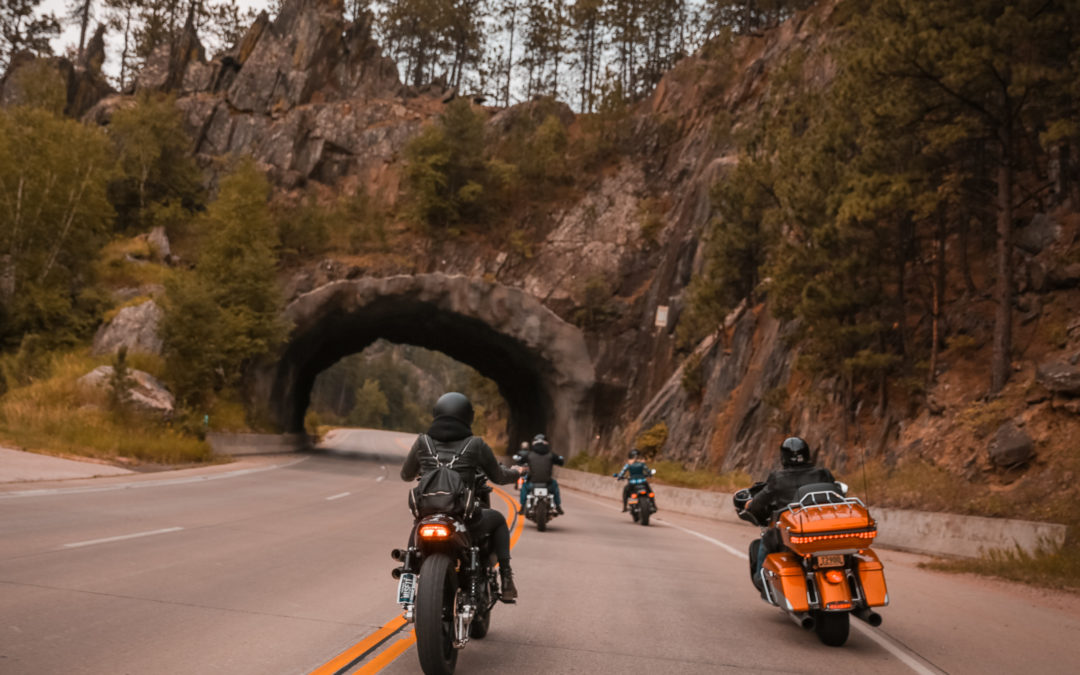 Women’s moto campouts have quite literally taken off in the last few years. With multiple locations popping up all over the US, there is no shortage of women ready to strap a tent on the back and ride in!

The Fox Run had all the right ingredients to make a memorable experience that truly captured Pennsylvania riding: winding back roads, farm land, quaint little towns, old barns, and a group of badass girls who like to ride and know how to have a good time! The vibe was effortless trust and friendship. By day we explored the beautiful country side and wooded windy roads and by night we partied, danced, and sat around a camp fire. There was always something to do, whether it was learning about different motorcycles, how to maintain our own bikes, riding, hiking, swimming, beer yoga, getting a tattoo, making necklaces, talking to the vendors, shopping, getting food from the food truck. Everything we needed was tucked away in the woods with us. The entertainment was second to none either. We had a DJ dance party one night where I sweat my ass off dancing with my friends. I haven’t danced that hard since I was 21 and in a club for the first time! There were burlesque dancers that were both beautiful and empowering to watch. Their confidence and beauty captivated us all. We saw fire dancers, an all girl band, bike races, and even had a massage therapist available. The Fox Run event is a true east coast riding adventure that I would recommend to any girl looking to explore new roads and meet life long friends. -@stephcatherine  The Fox Run

The setting is straight out of a storybook. A cozy campground nestled by a riverbank with a historic bridge leading to the tiny town of Narrowsburg greets you. Mist rises from the river and wafts around the bridge. The campsites are picture perfect with green grass, fire pits, fluffy trees, and vivid blue skies spattered with white puffy clouds. The giant fire pit seemed to be the central gathering spot, just outside of the barn. Anya, Ashmore, Atwyld and the Triumph crew are interacting with us and matching us with others who came from our general area. Night falls and the barn is full with karaoke, tattoos, raffles, laughter, danging, and live music!

Day trips were euphoric. We had 5 different routes planned out for us to chose from. Anya was handing them out Saturday morning, offering riding and dining tips as we ventured out for the day. We rode to the highest point in New Jersey, rode the famed Hawkes Nest, and had some breathtaking photo ops on a gorgeous suspension bridge. There was a “ghost tour” of haunted houses that are as old as the USA, or a waterfall tour with some of the most inviting swimming holes and water falls this Cali high-desert girl has ever seen.
Saturday afternoon was slow races, gymkhana, and other outdoor events. A BLAST! It seemed everyone attended and most competed. A sign said, “no boys beyond this point” which was fitting because there was an all-male camp out on the other side of the campground. They brought lawn chairs and lined their side of the venue to watch us complete with score cards. Our food truck collided with a deer that day so dinner was late but 805 and Sailor Jerry was on time! The after-party at the historic Inn (walking distance from the campsite) was the icing on the cake. The party continued there until 4AM (I think?). The intimate setting at BROEC2 sets the stage for lasting friendships that last a lifetime. This will be on my calendar every year. – @maryloup2
*

The 2nd annual Belles on Bikes Palomar Campout took place just 3 miles from the Palomar Mountain Observatory outside of San Diego, California. We took off from The Chopper Gallery in Temecula, and were treated to a gorgeous ride throughout the Southern California hills. Our route up the mountain is known as East Grade Road, and gave some spectacular views of the surrounding ranges as we twisted along the cliff face. 35 women rode in for the single night campout, a few of which were motocamping for the first time! We were treated to a dinner of sweet corn and jambalaya, competed through several rounds of corn-hole, and ended the night around a bonfire with more friends than we started with! This was absolutely one of the most memorable trips of the summer, and will surely be on my list for next year as well. Belles on Bikes

Set in the sprawling hills of Sturgis, South Dakota The Wild Gypsy Tour is the first of its kind! Located inside the expansive Buffalo Chip Campgrounds, The WGT is an all-women camping pavilion just steps from the famous Buffalo Chip Amphitheater, and a short ride from Downtown Sturgis. The “Best Party Anywhere” just wouldn’t be complete without a creative space for women to call their own, and The WGT set a great example for years to come. Women rode in from all over the country to experience the Sturgis Motorcycle Rally for the first time, and only one had been there previously! The Inked Iron Gypsy Bazaar was the shining light of the festival, offering a curated space for attendees to hang out, take in an old chopper movie, check out offerings from Biltwell and Inked Iron, and listen to some amazing live music until all hours of the night. The Wild Gypsy Tour

The Dreamroll is something nearly impossible to describe. If you’re local to the area, its just another weekend riding in the mountains and camping with friends. If you happen to live, say 1200 miles away in Southern California? Its the ultimate test of riding endurance, motocamping packing skills and straight up enthusiasm for making it happen. A 2400 mile round trip for 2 days of camping with whoever else is crazy enough to ride in! We encountered every sort of weather, a literal Gravel Mountain Road (that’s its name too!), sharing the road with local livestock, and a huge helping of “I can’t believe we just did that!” heaped on top of what was surely the most interesting weekend this summer. Located at Mt. Adams Lodge in Glenwood, Washington, the event space takes up one entire end of a retired airstrip high in the wooded mountains above the Columbia River. Cries of “I follow you on Instagram!” peppered the first night in camp, and we quickly found out that lightning and thunder over head definitely set the mood, as well as soaked the DJ’s equipment. Not to be discouraged, it is the PNW after all, the party continued throughout the weekend without any further weather-related mishaps. The last day was certainly bittersweet, as quite a few girls had hopped from event to event over the past month, and this marked the last big women’s moto campout until BRO5 hits Joshua Tree in late October. Word on the street is next years event will be a stones throw from Crater Lake in Oregon, which is roughly 300 miles closer to SoCal than the previous location (whew!) and possibly set up to hold an even larger group of women riders! The Dreamroll

Credited as being the first Women’s Moto Festival and Campout, this 4 day bike fest in the desert of Southern California has become the event of the year for women all over the country. With previous attendance soaring above 1200 riders, Babes Ride Out is hands down the biggest event of the year. Offerings include nightly live concerts, bull riding, free 805 beer, custom BRO tattoos, half a dozen amazing ride routes, Moto FAM raffle, the ever coveted merch booth, and so much more! This year, Babes Ride Out has partnered with the Mojave Desert Land Trust to remind us to be conscious of the space we occupy out in the desert “Take only pictures, leave only footprints” will be our words to live by! For those headed out this October, remember to pack and drink plenty of water! It’s sure to be a fantastic cap to a wild summer of good times, late nights, and long roads. Babes Ride Out